A few nights ago on The Daily Show, host Trevor Noah interviewed Mira Murati (CTO of OpenAI) about DALL$\cdot$E 2 and, more generally, the power of AI:

The whole interview is a great watch, but one thing that stood out to us is Trevor’s question at 3:50:

“So how do you safeguard them [generative models]?… We can very quickly find ourselves in a world where nothing is real, and everything that’s real isn’t, and we question it. How do you prevent, or can you even prevent that completely?”

In fact, editing photos of cute dogs is just the tip of the iceberg:

So, back to Trevor Noah’s question—is there any hope of protecting against this manipulation? We spent a few nights hacking away, and it turns out that—by leveraging adversarial examples—we can do exactly that! The details of our scheme are below, but the essence is that, by slightly modifying (imperceptibly, even) the input image, we can create a PhotoGuard, make the image immune to direct editing by generative models! 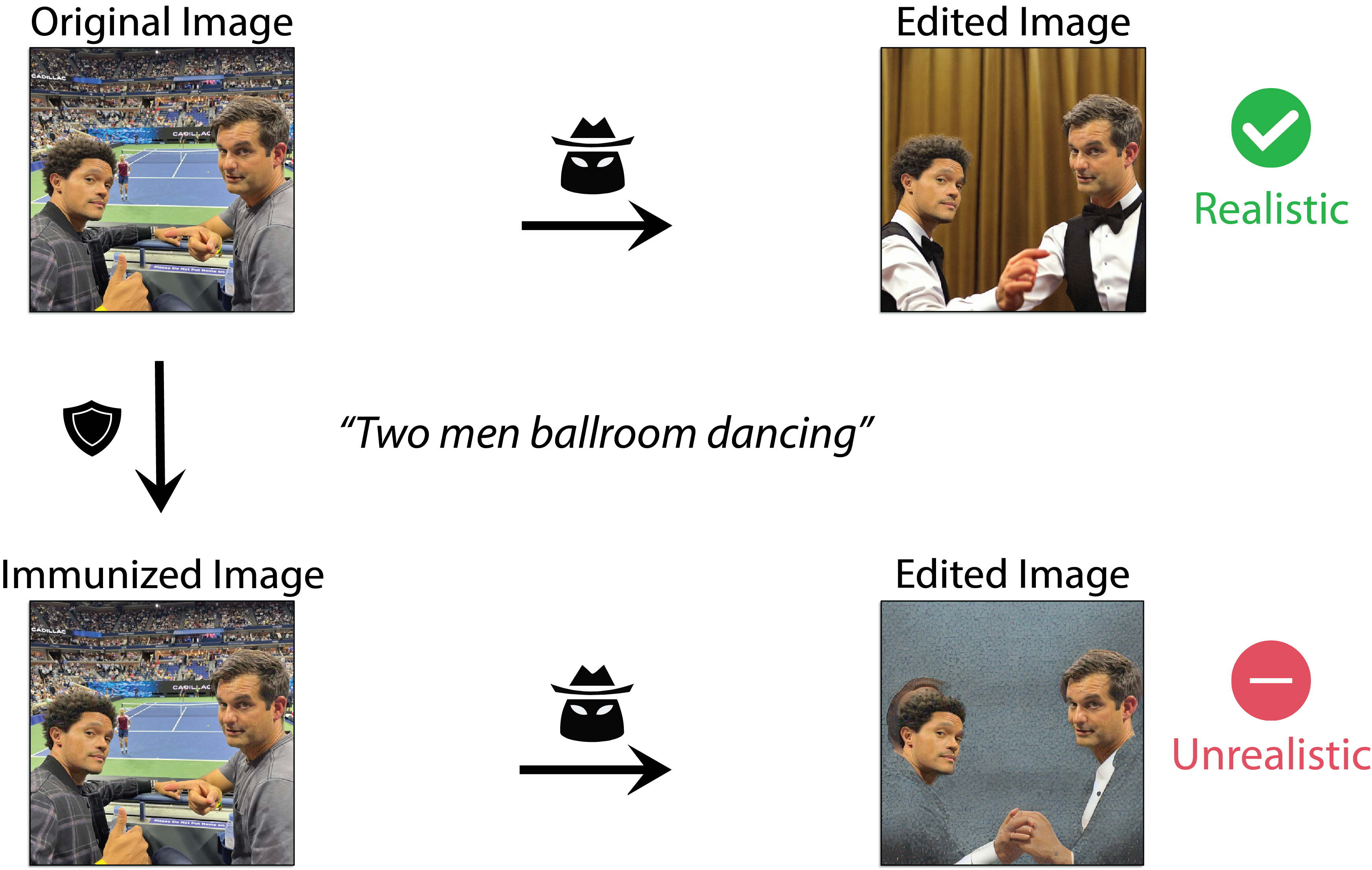 Note: One might (rightfully) point out that by re-training a diffusion model in the future, one will be able to get around our "photo guard" (in other words, that we are in a static defense vs. adaptive attack scenario). This is definitely true! However, our goal here is not to suggest that individual users should safeguard their own images by themselves. Instead, we hope that the companies providing the models themselves can provide an API to safeguard one's images against editing. 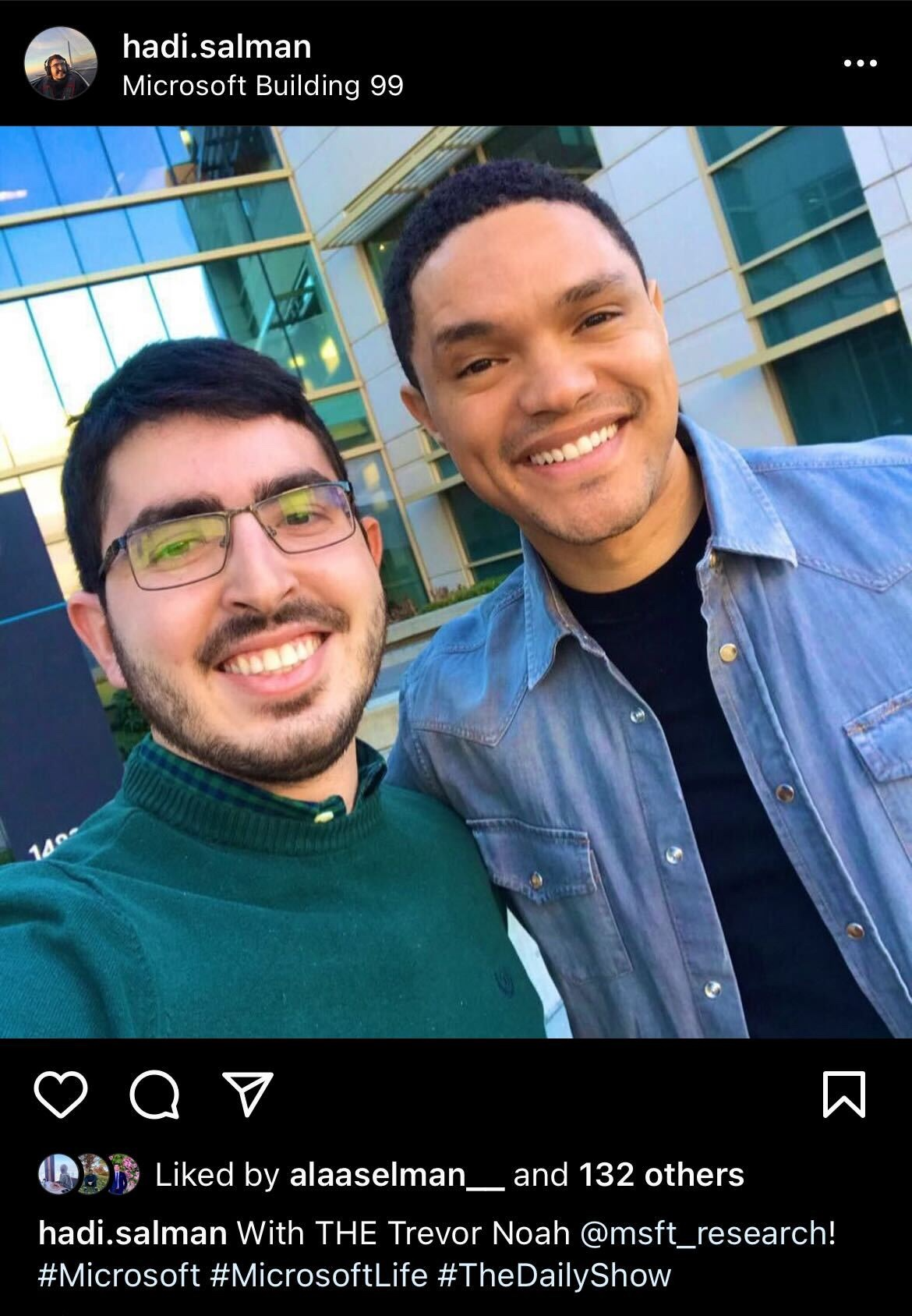 Now, Hadi can leverage diffusion-powered photo editing to “deepen” his (imaginary) friendship with Trevor. If the selfie was guarded, none of this would be possible (sadly for Trevor, it isn’t)!

The core of our “immunization” process is to leverage so-called adversarial attacks on these generative models. In particular, we implemented two different PhotoGuards, focused on latent diffusion models (like Stable Diffusion). For simplicity, we can think of such models as having two parts:

In the simpler of the two, we adversarially attack only the conditioning step of the diffusion process. That is, given a starting image $x_0$, we find an image $x_{adv}$ satisfying:

where $z_x$ is the embedding of the input $x$, and $z_{targ}$ is a fixed embedding. We set $z_{targ}$ to the all zeros vector (or even to an embedding of a random image), causing the diffusion model to completely ignore the starting image and focus only on the prompt.

However, we find that we can do an even stronger guard! Here, we modify the starting image with the goal of breaking the whole end-to-end diffusion process. Because the diffusion process is iterative and involves repeated application of a network, taking gradients through the diffusion process is memory-intensive. We found that differentiating through only four denoising steps was enough to throw off the entire diffusion process. With a little engineering, we were able to fit four steps onto a single (A100) GPU. As you can see, editing our immunized/defended photos lead to much clearer fake images than the previous guard.

Here are some examples of fake photos, with and without our “immunization!”

So, using relatively simple techniques relating to adversarial examples (and about a week’s worth of hacking), we were able to protect images against manipulation from diffusion-based generative models. That said, this is just the beginning, and there are still many unanswered questions!