A Data-Based Perspective on Transfer Learning

Transfer learning is a widely utilized technique for adapting a model trained on a source dataset to improve performance on a downstream target task. Used in applications ranging from radiology, autonomous driving, to satellite imagery analysis, the transfer learning paradigm also fuels the recent emergence of large vision and language models trained on enormous amounts of data, such as CLIP or GPT-3.

Why is transfer learning so effective though? And, in particular, what drives transfer learning performance? Definitely, much depends on the properties of the source model, i.e., the model trained on the source dataset. For example, recent works highlight the impact of the model’s architecture, accuracy, adversarial vulnerability, and training procedure.

In our most recent paper, we present a framework for pinpointing the impact of the source dataset on the downstream predictions in transfer learning. This framework draws inspiration from techniques such as influence functions and datamodels and it enables us, in particular, to automatically identify source datapoints that—positively or negatively—impact transfer learning performance.

We’ll now walk through how we calculate the influence of the source dataset in transfer learning, and then demonstrate how our framework can be used to:

Computing the Influence of the Source Dataset

How to pinpoint the relationship between the source dataset’s composition and the model’s downstream predictions? We build here on the influence functions and datamodels methodology (check out our previous post for a deeper dive into these) to study the counterfactual effect of removing source datapoints on the target model’s predictions. However, unlike in the standard supervised setting in which the focus is on individual datapoints, here we focus on removing entire classes. This is motivated by the fact that we expect the removal of entire classes to have a more measurable impact on the features learned by the source model (and thus the resulting model’s predictions).

So, at a high level, we first train a large number of models on random subsets of classes in the source dataset, and fine-tune them on the target task. Then we compute the influence of a source class on a target example by simply measuring the average difference in the model’s performance on a given target example when the class was included versus excluded from the source dataset. A positive influence value thus means that including the class improved the model’s performance on that example, while a negative value indicates that the class was detrimental to the correctness of the corresponding model’s prediction.

Identifying the Most Influential Classes of the Source Dataset

Now that we’ve calculated these influences, how can we use them to study transfer learning? First, let’s take a look at the ranking of the most positively and negatively influencing classes for a variety of target tasks. We first look at the influences from different ImageNet classes to the entire CIFAR-10 test set:

Also, the plot above suggests that there is a number of source classes, such as bookshop or jigsaw puzzle, whose inclusion actually hurts the overall transfer learning performance. So what happens if we indeed remove these classes from the source dataset? Well, as one might hope, they do boost the transfer learning performance on a variety of downstream image classification:

Target task accuracies after removing the most positively or negatively influential ImageNet classes from the source dataset.

In fact, we can get an accuracy boost of nearly 2.5% on CIFAR-10 (as compared to what one gets from pre-training with the full ImageNet dataset).

(1) Debugging the failures of the transferred model

Suppose our transferred model wrongly predicts the dog image displayed in the figure below—it labels it as a horse. Can we use our framework to understand why our model is making this mistake? Yes! The influences we computed enable us to identify the source class sorrel horse as one having a strong (and the strongest) negative influence on our image of interest. This suggests that the features learned by the source model due to the presence of this class might be the culprit here. Indeed, once we remove the sorrel horse class from the source dataset, our model now makes the correct prediction on our dog image much more frequently (with respect to the randomness of the training procedure).

Identifying highly negatively influencing source classes can explain why our transfer learning model made a mistake (middle). Once we remove the most negatively influencing class from the source dataset, the model predicts the correct label more frequently (right). Click through the thumbnails on the left to see more examples!

Imagine you want to find all the images of ostriches in the CIFAR-10 dataset. However, the problem is that CIFAR-10 does not contain any subpopulation annotations that could help with this task and having to manually look for ostriches among all the images in the bird class is not a very appealing alternative. Our framework allows us to do something much more scalable!

Indeed, as we already observed, the most positively influencing source classes usually semantically overlap with the images in the target dataset they influence the most. In fact, this goes further: the target images which are most influenced by a given source class tend to share relevant salient features too. So, to identify our ostrich subpopulation in CIFAR-10, we just need to look at all the images that are most influenced by the source class “ostrich”! Below we display some of the CIFAR-10 images identified in this way.

The CIFAR-10 images which are most positively influenced by a particular ImageNet class. Click through the thumbnails on the left to see more examples!

Indeed, below, we display ImageNet training examples that are highly influential on CIFAR-10 test examples. The source images that have a highly positive influence are often identical copies of images from the target task (just at a higher resolution)—a clear example of data leakage. On the other hand, images that have a high negative influence tend to be the ones that are misleading, mislabeled, or otherwise surprising. For example, the presence of the (amusing) ImageNet image of a flying lawnmower (see below) hurts the performance on a CIFAR-10 image of a regular (but similarly shaped) airplane. 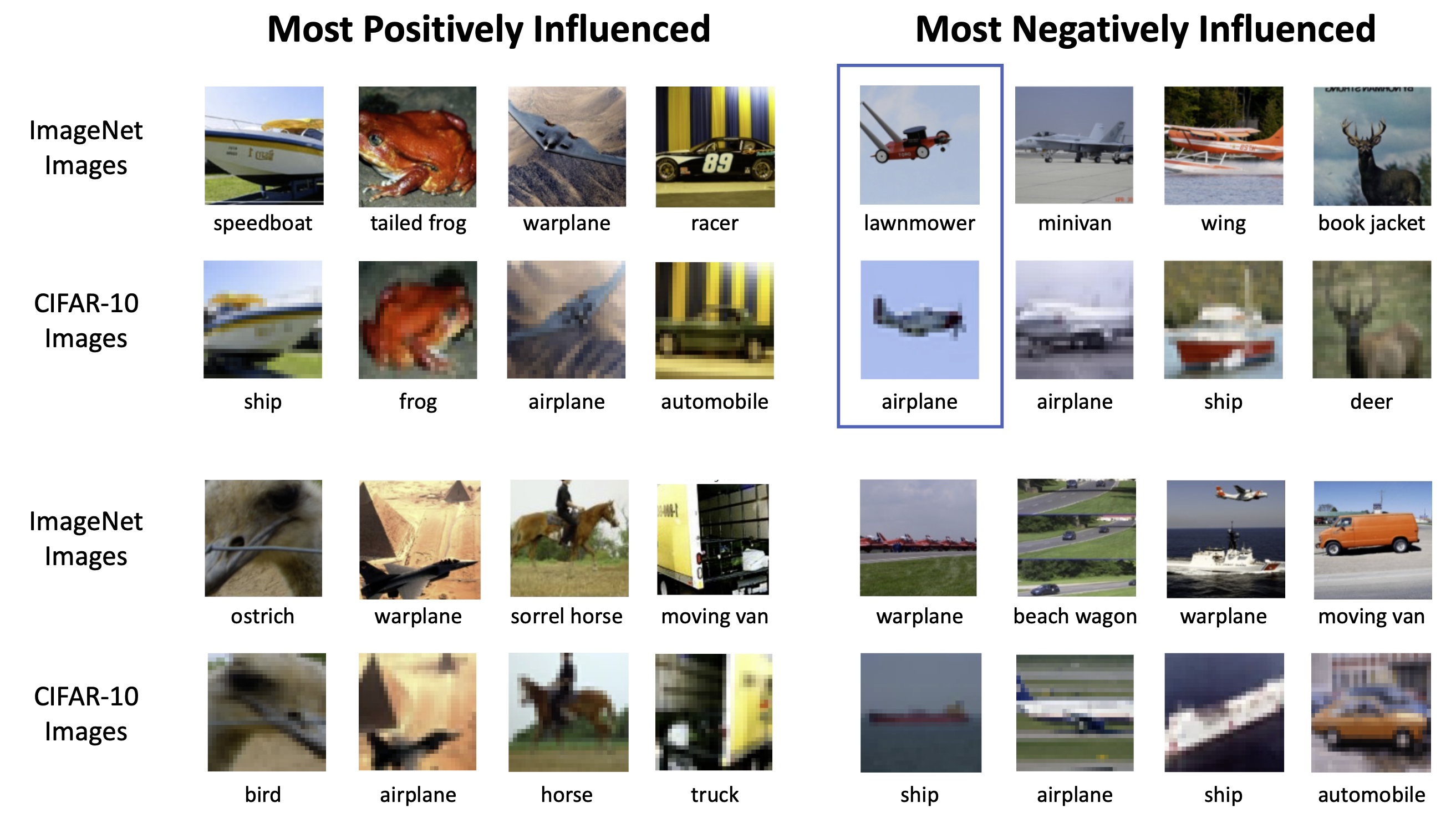