Building ML training pipelines involves many design choices. Even putting the choice of our training dataset aside, we have to decide on a model architecture, an optimization method to train the model, and whether to include one or more regularization techniques. On top of all this, we have to play with a bunch of hyperparameters until we get models that perform well enough on our validation set. This entire pipeline—the aggregate of all train-time design choices—is a learning algorithm, a function mapping training datasets to ML models.

Often, seemingly minor or innocuous tweaks to such a learning algorithm can affect the behavior of the resulting models in subtle and unintended ways. For example, pruning techniques that sparsify models prior to deployment end up hurting performance on underrepresented subpopulations. Random cropping—a standard data augmentation scheme that improves model performance—amplifies texture bias in image classification tasks.

We often want to know how a given design choice modulates the specific features that models learn. To that end, our latest work develops a general framework (called ModelDiff) for performing fine-grained, feature-based comparisons of any two learning algorithms.

In rest of this post, we will introduce our framework by walking through a specific case study: exploring the effect of ImageNet pre-training on the Waterbirds dataset. In this case study (spoiler alert), we’ll use ModelDiff to find that pre-trained models rely on the presence of a human face in the background to predict “landbird!” Importantly, we’ll do this without having any prior hypotheses, domain knowledge, or dataset annotations.

A common design choice in supervised learning is whether to train a model from scratch or fine-tune it from one pre-trained on a larger dataset. (A standard choice for this larger dataset is the ImageNet dataset.)

In this case study, we consider the Waterbirds dataset, for which the task is to classify images of birds overlaid on random backgrounds as either “landbirds” or “waterbirds.” Indeed, on Waterbirds, fine-tuning a pre-trained ImageNet model (rather than training from scratch) significantly improves overall performance.

But is that all pre-training does? In particular, what other (possibly undesirable) impact does pre-training have on the fine-grained behavior of the learned model?

The perspective we adopt in our paper is that models are different insofar as they use different features of the data to make predictions. But how do we know what features models use? This is where our method, ModelDiff, comes in. The core idea behind ModelDiff is that:

Models that use different features to arrive at their final predictions should rely on different training examples to make these predictions.

Below, we translate this intuition into a practical algorithm, applying ModelDiff to our problem of comparing pre-trained models to those trained from scratch:

Step 1: Tracing predictions back to training data with datamodels

To understand which training examples models rely on, we use datamodels—an approach to understanding how instance-wise predictions of (deep) models depend on individual examples in the training dataset $S$. If you’re not familiar with datamodels, we recommend reading our previous posts, or (if you’re in a rush) reading the summary below:

Linear datamodels. A linear datamodel $\theta_x$ for a test example $x$ is a linear function that takes as input a set of training data indices $S’ \subset [n]$ and predicts the model output on $x$ if we were to train a model on just the corresponding training examples. It turns out that these linear datamodels can surprisingly accurately predict how counterfactual changes to the training dataset change final model predictions! That is, we have that $$\theta_x^\top 1_{S'} \approx \mathbb{E}[\text{margin on $x$ of classifier trained on S’}],$$ where $\mathbf{1}_{S’} \in \{0,1\}^n $ is the indicator vector of $S’$ in the training set $S$. Intuitively, the datamodel weight $(\theta_{x})_i$ signifies the contribution of the $i$-th training example to the model’s performance on test example $x$.

Datamodels as representations. As highlighted in the original paper on datamodels, we can view each linear datamodel $\theta_x$ as a representation (or embedding) of its corresponding test example $x$. It turns out that there are two key properties that arise from this perspective that naturally facilitate comparisons between the corresponding learning algorithms:
Taken together, these two properties enable a fine-grained analysis of models in terms of how they use training data to make predictions.

The first step in our pipeline is to compute two sets of datamodels \(\{\theta^{(1)}_{x_i}: x_i \in T\}\) and \(\{\theta^{(2)}_{x_i}: x_i \in T\}\) for the test set $T$, each set corresponding to one learning algorithm. In our case study here, the two sets of datamodels correspond to Waterbirds models trained with and without ImageNet pre-training, respectively.

The datamodels $\theta^{(1)}_x$ and $\theta^{(2)}_x$ describe how each algorithm uses the training data to make a prediction on a given example $x$. What we’re really interested in, however, are the differences in how these two algorithms use the training data. To isolate these differences, we compute two residual datamodels, $\theta^{(1 \setminus 2)}_x$ and $\theta^{(2 \setminus 1)}_x$ for each example $x$. As illustrated below, the residual datamodel ${\theta}^{(1\setminus 2)}_x$ represents the training direction that influences ImageNet-pretrained models on example $x$ after “projecting away” the component that also influences models trained from scratch: 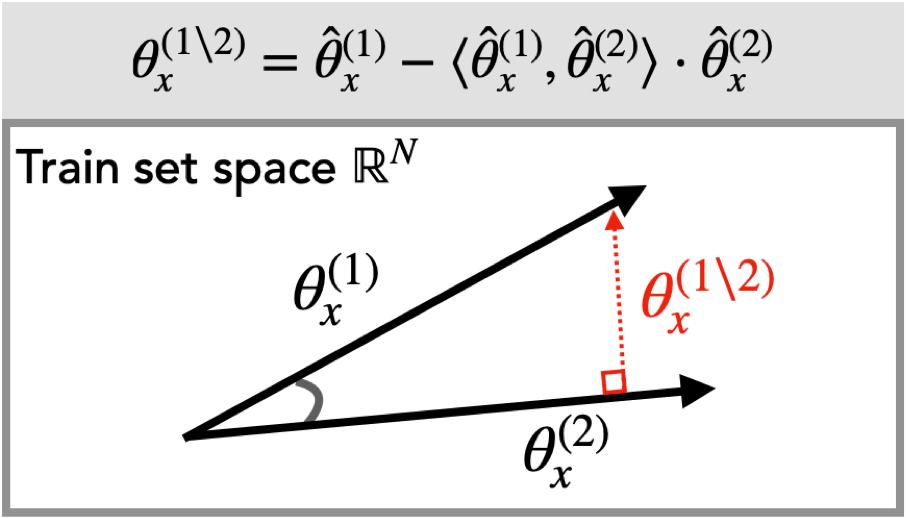 where $\widehat{\theta}_x$ denotes the $\ell_2$-normalized version of datamodel $\theta_x$. Analogously, the residual datamodel $\theta^{(2 \setminus 1)}_x$ encodes a weighted combination of training examples that influence predictions of models trained from scratch but not of models pre-trained on ImageNet.

The outputs of Step 2 above—i.e., the two sets of residual datamodels ${\theta^{(1 \setminus 2)}_i}$ and ${\theta^{(2 \setminus 1)}_i}$—capture how models trained with and without ImageNet pre-training differ, but only at the per-example level. Our goal, however, is to understand global differences in model behavior. To this end, we use principal component analysis (PCA) to distill the residual datamodels into distinguishing training directions, i.e., representative directions in training set space (i.e., in $\mathbb{R}^{n}$) that generally influence predictions of models trained with one algorithm but not the other.

In our paper, we show how to quantify the importance of a given weighted combination of training examples to each algorithm: as shown in the plot below, the top principal components of the residual datamodels \(\{\theta^{(1 \setminus 2)}_i\}\) are important to Algorithm 1 (pre-training then fine tuning) but not to Algorithm 2 (training from scratch); and vice-versa for \(\{\theta^{(1 \setminus 2)}_i\}\). 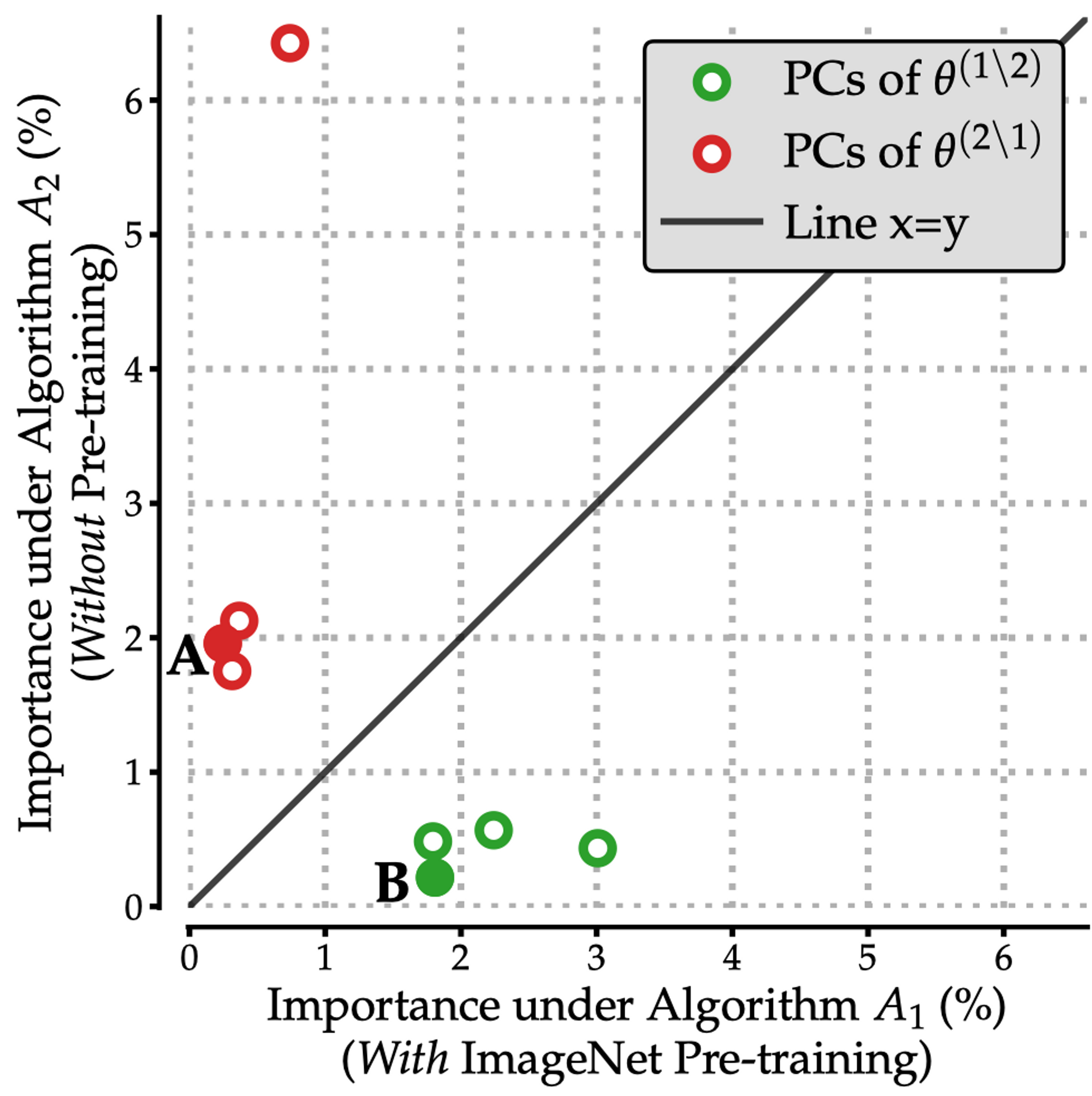 Caption: Each red (resp. green) point represent distinguishing training direction—a weighted combination of training examples that influence predictions of models pre-trained on ImageNet significantly more (resp. less) than that of models trained from scratch. The $x$ and $y$ coordinates of each point represent the fraction of explained variance under Algorithm 1 (pre-training) and Algorithm 2 (training from scratch).

We can now take each principal component and look at the test examples whose residual datamodels are most aligned with that direction: this yields a set of subpopulations distinguishing learning Algorithm 1 from 2, and vice versa.

How do we verify though that the distinguishing subpopulations ModelDiff output actually capture meaningful differences in model behavior?

Let’s start by visualizing these subpopulations. That is, let’s take a look at the subpopulations surfaced by distinguishing directions annotated as $\textbf{A}$ and $\textbf{B}$ in the scatterplot above: 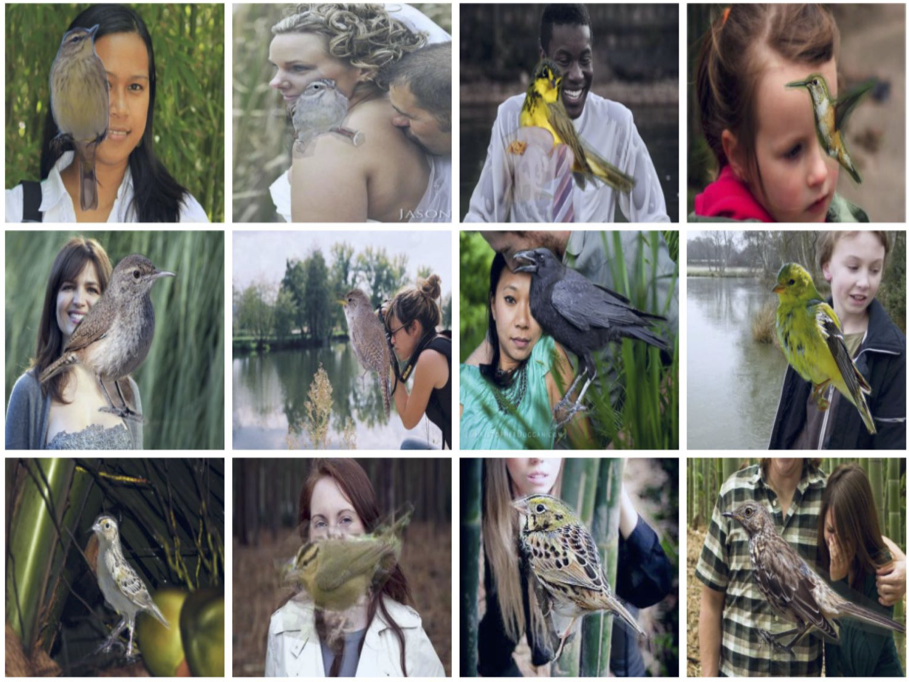 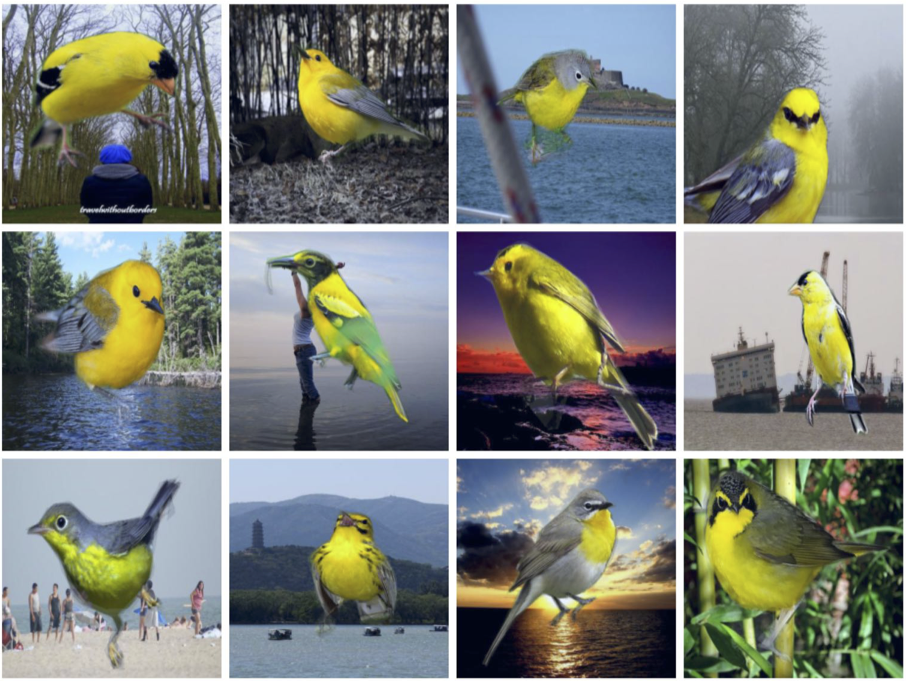 Ok, so these are plausible hypotheses, but can we go a step further and actually test whether these inferred features—yellow color and human face—influence model behavior as we suspect they do? Yes, via explicit counterfactual experiments!

Indeed, if ImageNet-pretrained models rely on a “human face” feature, simply adding a face to image backgrounds should consistently change the behavior of these models (but not of models trained from scratch). Similarly, just adding a small yellow patch to images should influence models trained from scratch, but not those that are pre-trained on ImageNet. Is that the case?

It turns out that it is! The plots below demonstrate the effect of adding a yellow patch or a human face on the confidence of models in predicting the class “landbird”.

In this post, we introduced a general framework, ModelDiff, for fine-grained, feature-based comparisons of any two learning algorithms. Our framework is general in that we can compare any set of learning algorithms that are applied to a common training set. (For instance, one could even compare a neural network to a random forest classifier.)

In our paper, we further showcase using two other case studies—one on data augmentation and another on SGD hyperparameters—how ModelDiff can help us understand how standard design choices impact model behavior in a fine-grained manner.

More broadly, our framework demonstrates how adopting a data-centric lens and abstracting away internal details of a given model can help us probe properties of learning algorithms.